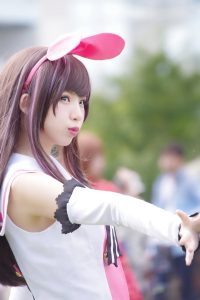 It’s mid-August which means it time for the largest summer anime and manga event in Japan: Comic Market (Comiket) 92 just ended. A lot, and we mean a lot, of people flock to the Tokyo Big Site to purchase new official merchandise, buy parody works of their most loved titles, and cosplay as their favorite characters. Here you can watch Enako, Japanese super cosplayer, and the cosplay scene at Comiket 92. 22-year-old cosplayer Enako recently appeared on Japanese talk show Nakai no Mado as part of a special feature on Comiket, Japan’s semiannual independent comics extravaganza, and the otaku lifestyle. While speaking with the show’s hosts the subject of Enako’s cosplay earnings came up, which she gave as “more than one million [US$9,700] a month.”

Comiket, otherwise known as the Comic Market Komikku Māketto), is the world’s largest dōjinshi fair, held twice a year in Tokyo, Japan. The first Comiket was held on December 21, 1975, with only about 32 participating circles and an estimated 600 attendees. Attendance has since swelled to over a half million people.

It is a grassroots, DIY effort for selling dōjinshi, self-published Japanese works. As items sold in Comiket are considered very rare (because dōjinshi are seldom reprinted), some items sold at Comiket can be found in shops or on the Internet at prices up to 10 times the item’s original price, and in certain cases, more than 100 times. The continuing operation of Comiket is the responsibility of the Comic Market Preparatory Committee (ComiketPC).

Enako (born January 22, 1994) is a Japaneseprofessional cosplayer, voice actress and singer. She is from Nagoya. Her hobbies include cosplay, anime, and video games. Enako was recently featured the on Japanese talk show Nakai no Mado to talk about Comiket, a large annual anime convention in Japan. During the interview, Enako revealed that she makes over 1 million yen (roughly $9,700) per month.

How to enjoy BABYMETAL LIVE! -Apparel and Belongings-

Introduce the getting popular idol in Japan!